I dont normally rant about things like this, but maybe because it is coming up on Kim’s birthday and with her on my mind more then usual, I am a bit more irritated by this type of thing.

On Facebook, I liked the page for a game I have played on my phone.  Made by Electronic Arts, is a Simpsons game called Simpson’s; Tapped Out.  So instead of being outside and taking advantage of a 50 degree February day, I was online while nursing this damn cold I have had for a week.

this popped up on my timeline…. 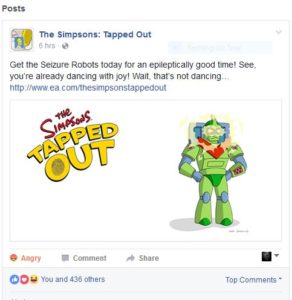 I read this and couldn’t believe what I was seeing.

A Seizure Robot?  For an Epileptically good time???

Do they understand what Epilepsy can do or has done to people, to their friends, to their families???

I dont think so.

What made this worse, was the complete lack of empathy by most of the comments on that post.  Dont get me wrong there were people who commented about this lack of decency by EA, but more who took the “its only a game” mentality.

Its only a game til someone gets hurt……

It hurts to know that such a large company, would think it is alright to ridicule those who deal with Epilepsy and its aftermath.

It also hurts to not see a response to this by the Epilepsy Community.

Maybe I just havent seen it yet, but we need to do something, we need to make a statement they will understand.

for one, I have deleted all EA games off my phone, and I have pulled all of the EA games for our Wii off the shelf.  Those will be going into the garbage.

Dont stand or sit there and do nothing, Seizures are not funny.

Epilepsy is not a joke.

Now I will step down from my soapbox.

3 Responses to "You Have Got To Be Kidding Me!"