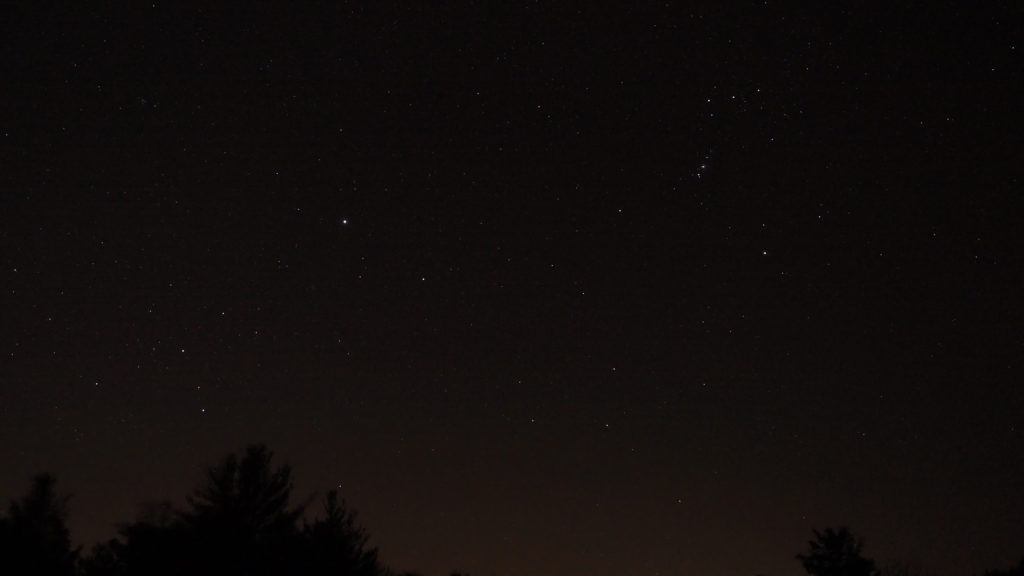 I started to write a post awhile ago, on the importance of researching what it is I am going to be shooting, and I will tell you why.

I went out a month or so ago, hoping to shoot some sunflowers on a farm in Southeastern Connecticut.  If I had done my research before going, I wouldn’t have found a field full of wilted brown and dull yellow flowers and stalks.

I did however find that the farm makes its own ice cream and it is pretty good lol.

A couple of days ago, I got an email from Olympus.  One of those newsletter emails we all get from time to time from various people, places and times.  Subject line was “Shoot the Orionid Meteor Shower!” and boy has it grabbed my interest.

The research started in earnest.

The Orionid Meteor Shower is a prolific meteor shower that is associated with Halley’s Comet and get their name because they seem to come from the area of the constellation Orion.  It usually comes around during October.  Its amazing what you can find on Wikipedia.

I have tried my hand at Astrophotography before, with minimal success.

I am pretty sure, I caught the northern Lights in that picture.  That green glow just over the horizon might be it, not positive tho, but I did have the bejesus scared out of me by a Black Bear that decided to walk up on me while I was working on a shot.  Talk about getting the blood flowing on a cold nite.

I am getting a bit off topic and long winded here, so lets get down to it.

My research into this started off with a great website, American Meteor Society.  They are an offshoot of the American Astronomical Society and were founded in 1911, were founded as a collaborative effort between amateur and professional Astronomers to observe and record meteors. (sometimes you have to really read thru a website to understand what they are and what they are doing.)

This is fantastic site that tells you what to expect for the week and also tells you about fireballs and points you towards all kinds of resources for observing meteor showers.  Right now, the Orionids are active along with two others, The Northern and Southern Taurids.  The Taurids unfortunately are not as active as the Orionids are.  With an expected peak between the 20th and 22nd I have to check on the second most important thing…..

The last few times I have wanted to try shooting meteors, the weather has been far from co operative, so I went to my favorite weather website Weather Underground.  My luck seems to have changed, the weather is supposed be perfect for this.  Clear skies all weekend long.

Now that I know the weather is going to be great and the meteor showers are expected to peak this weekend, I need to figure out where the best place around here is to go to see and shoot them.

There are many different resources for this on the internet, there is Dark Site Finder,  which is a pretty neat site for what I need.  It has a light pollution map, a page for the Aurora Borealis (Northern Lights), a page for weather, photography tips.  This is a really great resource.  It looks like my usual haunt, Saville Dam in Barkhamsted, for night time shooting is one of the darker places in Connecticut, unless I go way into the extreme Northeast Corner of Connecticut.  For really dark skies tho, I will have to travel a couple of hours North or Northeast.

It isn’t perfect tho, there is a bit of light pollution that spills in from Hartford and Springfield MA.  Hopefully not enough to miss what I am hoping to catch.

Maybe I will drive a bit further to a dark spot…..

Alright, so I know there is a meteor shower this weekend, I know the weather is going to be fantastic and I know where I have to go for optimal viewing.  I need the answer to the most important question of all.

Where do I look to see the meteor shower?

Well based on the name alone, we can assume that they are somehow tied to the constellation Orion.  This time of year Orion rises in the east at late evening, fairly close to midnight.  To help with that, I have 2 programs that I use.  One is called Stellarium.  This desktop program is fantastic and I have it loaded unto my laptop also, for use when I am on the road.  I definitely recommend this one.

The other program I use is one that I keep on my tablet and my phone.  Google Sky Map is fantastic, think of Google Earth but on your phone and showing the stars.  You can hold it up and point it to your looking and it will tell you what your looking at.  I use this one when I am standing next to my camera.

Both of these programs can be toggled to a screen that is red and night vision friendly.

The most important things I will need, have to be taken care over the next day or two.  I have to make sure all my camera batteries are charged and also my tablet and laptop.  The tripods have to be put into the car and the thermos cleaned and ready for massive amounts of coffee.

It will be interesting, I will have 3 cameras with me.  My Olympus OMD E-M1’s and a Olympus Stylus 1.  I plan on setting one up on the interval setting taking a 15 second picture of the sky every minute or so and then one of the E-M1’s set up for star trails, so probably an hour long exposure then just playing with the other E-M1, trying for a Milky Way shot or two before setting it up also and taking 15 second photos of a different part of the sky.

Yea I know, I am going overboard.

There are a couple of good articles on shooting meteors out there on the internet such as these ones.

How to Photograph a Meteor Shower: Capturing the Perseids By Jerry Lodriguss | Aug 1, 2016

How to Photograph a Meteor Shower By Luis Argerich

Just a couple of articles that I found while researching for this weekend.  Just hop over to Google and search for astrophotography and meteor shower photography and all kinds of stuff  will come up.  Dont be to concerned if the articles are for past meteor showers.  I found quite a few covering the Perseids from a year or two ago when it was supposed to be one of the most spectacular and busy ones in a few years.  The tips for photographing the showers is the same, just the point in the sky they are coming from is different and the dates to.

Those few articles discuss settings that will help with you shooting the night sky.

I will be following up this post after this weekend’s adventure and I will discuss camera settings and all kinds of other things.  Like my thoughts on the best cheap coffee to grab at a gas station while on your way to your destination lol.

One Response to "There is a Meteor Shower this weekend….. Oooo something cool to try and shoot"